Ed grew up in sunny (ish) Scarborough. He is from  a Christian family  and knew of Jesus from a very young age. He was thoroughly passionate about God as a young teen and even got baptised at the age of 14.

However at sixteen he realised he 'just wanted to have a bit of fun'. Three years and a couple of girlfriends later Ed found himself in his second year at uni in Leeds where he was working on his dream of becoming at rock star, when he realised he wasn't really having all that much fun.

He started getting involved in a local church, and became a regular member at the Leeds Met CU. It was then that for the first time he truly understood the gospel - that he was even more sinful than he thought he was, but that God loved him even more.

This turned his whole world upside down! From then on Ed stumbled through the rest of his degree trying to figure out what it meant to live for Jesus at uni, and after graduating he took part in Relay and had a blast learning more about God, and getting to know him better too.

Ed lives in Leeds with his lovely wife Hannah. He loves talking about Jesus, cycling and cheese (you can't beat a bit of wensleydale).

Please give now to support Ed's vital work with Christian Unions. We can't do this without you.

Partner with Ed in prayer by receiving a prayer letter. 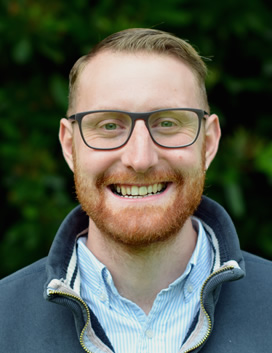