James's time studying history at Royal Holloway University of London (RHUL) was split evenly between the hockey pitch, the Christians in Sport group, the Happy Man pub and doing the odd all-nighter in the library, whilst being a happy member of Christ Church Virginia Water.

He also showed up for lectures. In his first year, the CU approached James and asked him to think about how to reach sports people; so James spent a chunk of his time leading a Christians in Sport group, with some exciting effects. Upon graduating, James worked at St Andrews Leyland Parish Church for 2 years.

He probably tends to understate the immense privilege James had in being born to Christian parents but it wasn't until he was 11 and on a Christian youth camp that he first understood the good news about Jesus. Prior to that point, he regularly was bored in Sunday school, angry when things didn't go his way, keen to show everyone else how stupid they were and hated the end of the football season because it meant he would have to go to church on a Sunday instead.

But it was at H&DCYC camp that some jolly fellow in socks 'n' sandals took the time to explain that all people had one great need: for Jesus to forgive them for the way they have treated God. James thought that sounded important. So he started to follow Jesus as King and ever since he has had a growing realisation that Jesus, the Son of God who was crucified and is now alive, is anything but boring and a growing sense that it is utterly tragic that so many people don't yet know the joy of following him. He wants to live his life appreciating the former and changing the latter.

James is a lover of many things: good writing, scotch, Kelloggs "Special K", travelling of any kind, live music/theatre, bargains, history, unusual/loud people, northern food at northern prices, all sport (but not frisbee), green tea and the wonderful satisfaction of peeling off a whole sticker in one go. He hates the microwave beeping, the lamentable state of English football, Hollywood blockbusters and the grammatical crime of using more than one exclamation mark. That last one should be a capital offence.

James works with these CUs...

Please give now to support James's vital work with Christian Unions. We can't do this without you.

Partner with James in prayer by receiving a prayer letter. 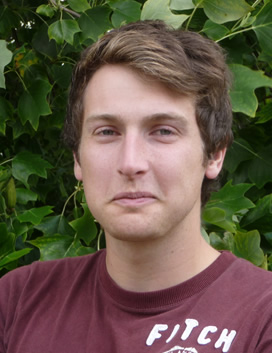