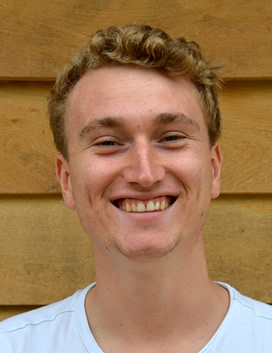 After many years throwing paper aeroplanes at the back of bald heads, Josh eventually began to listen at church after noticing a difference in his friends and family, and gradually came to realise his own need for Jesus.

Originally from Stockport, Josh first arrived in Beautiful-Brum as a student at the University of Birmingham where he studied English Language and quickly joined the Christian Union. Josh's time with the CU really encouraged him to speak boldly about Christ, and by God's grace he had the absolute privilege of praying with close friends as they became Christians. In his second year, Josh served as the Evangelism Co-Ordinator for the CU and loved organising the Christmas Carol Concert and bi-weekly Lunchbars, which saw many students questioning the claims of Christianity.

After graduating, Josh decided to carry on telling students in Birmingham about Jesus, spending a year on the UCCF Relay Programme. Now, Josh is married to the wonderful Tabitha, and is desperate to see more students find life in Christ.

Although Josh likes to consider himself as a fairly adventurous guy, enjoying kayaking, hiking, and jumping into the sea, Tabitha often mocks him for never straying far from his beloved Chicken Korma. (He hasn't even had a Birmingham Balti yet!)

Josh works with these CUs...

Please give now to support Josh’s vital work with Christian Unions. We can’t do this without you.

Partner with Josh in prayer by receiving a prayer letter.