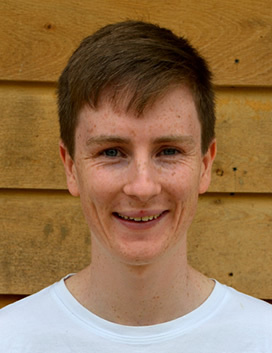 Mike grew up a few minutes away from Shakespeare's birthplace, wrote a few endearingly awful books that he somehow sold to his primary school classmates, and decided he wanted to study English Literature at Cambridge University so he could become a writer.

Then the summer after he was baptised, Mike volunteered on a Bible camp for young people and saw a boy coming to faith for the first time. He came home buzzing, wondering if there was some way of doing this at school - and he's been passionate about Christian Unions ever since! He still can't quite believe he gets to spend all day helping students to share the beauty and reality of Jesus with the people around them, in the crazy and wonderful context of university!

He still loves writing, but these days it's mostly spoken word poetry, having been inspired by performers like Kate Tempest and Harry Baker. He also loves football (in a half-hearted attempted to be a bit more normal), and cheesecake, and the West Wing.

Mike works with these CUs...

Please give now to support Mike’s vital work with Christian Unions. We can’t do this without you.

Partner with Mike in prayer by receiving a prayer letter.