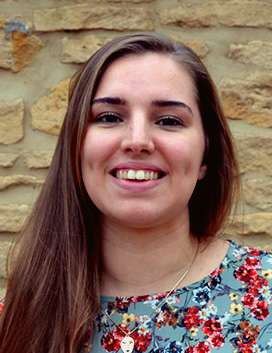 Naomi grew up in Northampton and attended the University of Northampton to study Acting & Creative Practice. There she was heavily involved with the small but developing CU and served as the Worship and Prayer Coordinator.

She had the opportunity to share her faith with her fellow actors through the CU events, as well as creating a piece of evangelistic theatre for her dissertation which has now gone on to be performed in Christian Unions in the Midlands. Her time at university, particularly being part of such a close-knit course, was vital to her growth as a Christian and as an evangelist and she knew half way through her university experience that student ministry is something she wanted to pursue.

After university, Naomi went on to be a Relay worker at Coventry University where she was able to grow her passion for creative evangelism and utilise the skills she had learned in her Acting degree to help her in her mission work. Relay will hold a special place in her heart as it was such a transformational year of growth and building life-long friendships.

Naomi works with these CUs...

Please give now to support Naomi’s vital work with Christian Unions. We can’t do this without you.

Partner with Naomi in prayer by receiving a prayer letter.