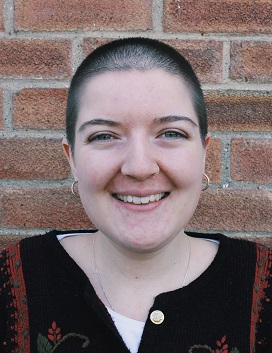 Naomi grew up in a small village in Bedfordshire. Knowing almost no Christians her age, she struggled to see the relevance of her parents’ faith in her own life. She was convinced that God existed, the world was created, and sin was real, but she didn’t see how any of it should impact the way she lived. When she was 15, mid rant in a Philosophy lesson, a friend invited her to the school Christian Union. It was there that she met other young Christians and saw them living Christ-centred lives.

Naomi went to Royal Holloway University where she studied English Literature, with a failed attempt to enjoy it combined with Drama in first year. Various people had told Naomi about UCCF before she started university, so she’d already memorised the CU’s publicity, hunted down current members at Soul Survivor, and decided she’d be a Relay Worker after graduating. Her expectation of being a Christian at university was to spend all of her time with the CU and avoid students outside this bubble. It came as a big surprise to her when the CU told her to go back to her flat and lectures, spend time getting to know the people there, and tell them about Jesus. Terrifying!

Naomi has since learned that it’s actually the opposite. The easier it became to chat about faith, the less excuses she could make to not do it. It’s been one of the greatest joys and privileges during her time at university and as a Relay Worker to share the Gospel with her closest friends and total strangers. After her Relay year in Coventry, Naomi is excited to be back and continuing to invest in the CUs that significantly transformed her student years.

Naomi loves talking about books (ask her about her dissertation on Pilgrim’s Progress and she might not stop) and looking at cute dogs on Instagram. Her proudest achievements are the many charity shop bargains in her wardrobe.

Naomi works with these CUs...

Please give now to support Naomi’s vital work with Christian Unions. We can’t do this without you.

Partner with Naomi in prayer by receiving a prayer letter.