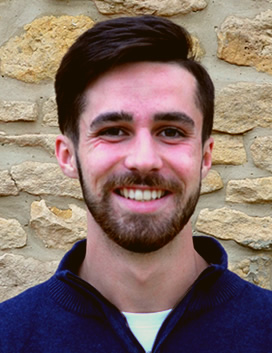 Tom was blessed to grow up in a Christian family where his parents faithfully taught him the gospel from an early age. His testimony is fairly 'ordinary' having become a Christian in his early teens but is thankful to God for the great privilege of a loving family that made following Christ a priority and lived it out.

After finishing sixth form, Tom got the call up from the small town of St Neots to the city of Exeter where he spent three years studying History and International Relations. Aside from spending huge amounts of time in coffee shops, pubs, and at the beach, he was blessed to be part of St Leonards Church Exeter and be heavily involved in the Christian Union. Both were hugely influential in formulating his faith and passion for God's word and encouraging him to live for Christ as his Lord and Saviour.

Following university, Tom was able to follow his dreams and move to the big smoke to work for an MP as part of the CARE Leadership Programme. He enjoyed a brilliant year in Parliament witnessing the turmoil of the final few months of Theresa May's leadership and the unique entity that is Brexit as well as a good number of protests. He continued to spend excessive amounts of time in pubs and coffee shops except this time it was far more expensive and without the added bonus of the beach. He joined the Globe Church on the Southbank and learnt, and continues to learn, a lot about the need to depend on God and avoid the pitfalls of pride in a city and industry built on self-dependence and 'success'.

Having been in Parliament for a year Tom is excited to be working with politically-minded students across the country, partnering with them in the challenges of the political world and helping them to live for Jesus and pursue a political career defined by His word. The opportunities for Christians to speak the truth in love to the world and pursue a politics defined by love, justice, and integrity are enormous. It is his prayer that we will see a generation of politicians emerge who are living with Christ as their Lord and Saviour transforming the political world as we know it.

Tom will no doubt continue to be found in pubs or walking around with a flat white but he may also be found following his other joys; football, running, hanging out with mates, or spending many hours immersed in Spotify.

Please give now to support Tom’s vital work with Christian Unions. We can’t do this without you.

Partner with Tom in prayer by receiving a prayer letter.