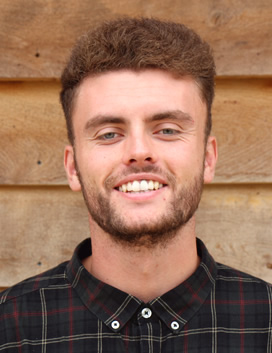 Joe’s first 18 years were spent in little-known, largely-loved Littlehampton; a coastal town famed for Peter Pan, the UK’s longest bench and that scene in The Inbetweeners where Neil punches a fish.

Growing up in Littlehampton, he found the best of mates and a spot in a touring Jamaican steel band. The greatest find of all happened a year or so before leaving, when Joe discovered Jesus is alive and chose to follow Him.

A move up north to university in York saw Joe study a combined arts degree. Wonderfully, God used this time as an undergraduate to grow in him a love for Christ and a desire to see those who don’t yet know Him follow Him too. Joining with dear CU friends to hold out the gospel threw up some of the most formative and enriching experiences of his student days.

God has continued to shape in him an enthusiasm for evangelism during an influential UCCF Relay year in Durham, and has since stretched him further in areas of public persuasion and creative witness as he served alongside students across Europe with MOET (Michael Ots Evangelism Trust). Many a valuable lesson was learned about God’s grace working for good where one often feels weak.

Having now joined the North East team as their second outed cake-with-cheese eater, Joe is excited to be supporting students in York to live in Him and share their faith, expectant to see more lives gloriously transformed by the good news of Christ. Spikeball, performance poetry, Liverpool Football Club, the Bedingfield siblings and ambitious odds-ons are some of Joe’s other favourite things.

Joe works with these CUs...

Please give now to support Joe’s vital work with Christian Unions. We can’t do this without you.

Partner with Joe in prayer by receiving a prayer letter.