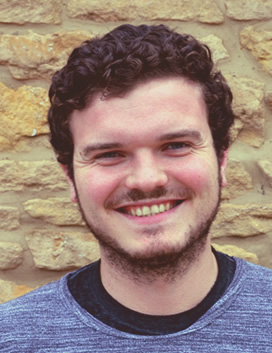 Alex was born and bred in Northern Ireland, and after roughly a decade away he is still clinging on to the accent.

After moving to Aberdeen for university, with the only goal being to join the hockey team, he quickly discovered the CU. Through the CU he heard the gospel, found a local church and was encouraged to be living and speaking for Jesus as a student.

He moved down south to be the Relay worker at Royal Holloway University. After Relay he moved back to Aberdeen, and spent two years as the student worker for a local church, where he loved seeing students grow in their understanding and love of God through reading the bible with them.

Alex loves exploring the great outdoors of Scotland, from climbing mountains in the Highlands, to wild swimming at the coast. He enjoys sport despite being mediocre at most of them, but tries his best on the hockey pitch. He also likes single malts, bacon rolls, irish bread and pubs with dart boards. He dislikes high-5s and gloves. If you find yourself in Aberdeen after reading this, send him an email and he'll have you around for a cuppa.

Alex works with these CUs...

Please give now to support Alex’s vital work with Christian Unions. We can’t do this without you.

Partner with Alex in prayer by receiving a prayer letter.