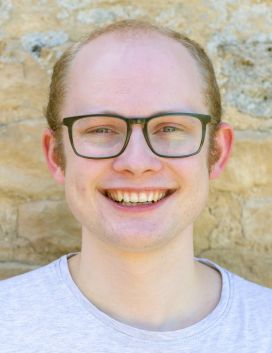 Matty grew up in a small town in North Yorkshire and came to faith there as a teenager. He later moved to the Midlands to study Physics at the University of Birmingham, but it was only then that he began to take his faith seriously. Before coming to university, the word evangelism meant very little to Matty - he'd heard the word but didn't know what it meant. That all changed when he went to his Christian Union’s meetings as a fresher - he was bowled over by the vision to give every single person on campus the chance to hear the good news about Jesus! How could anyone stay quiet, having heard this amazing truth that everyone needed to hear?

Matty was so convinced by this vision that he decided to give over a year after graduating to work with CUs on the UCCF Relay Programme. He then spent a year working for his university church in Birmingham as a ministry trainee. Between these two roles Matty had a lockdown wedding to the wonderful Ellie.

God used Matty’s time in the CU to change his life and he can’t believe that he now has a job where he gets to help other students have experiences like him. Matty works with the CUs in Birmingham and Wolverhampton and passionately believes these students are best placed to reach other students. He’s thrilled to get alongside them and to help prepare and equip them to tell their uni friends the amazing gospel message!

Matty works with these CUs...

Please give now to support Matty’s vital work with Christian Unions. We can’t do this without you.

Partner with Matty in prayer by receiving a prayer letter.